Where is the best place to see Orangutans?

Many of our clients have asked us this seemingly simple question- where is the best place to see Orangutans? Some clients also add “in the wild”.  Like most simple questions the answer is not necessarily straight forward and one should start by answering “it depends!” So we thought we would start by running through the options and identifying the pros and cons of each destination of the top four destinations before drawing any conclusions as to where to see the most intelligent mammal on earth, excluding us humans.
The main options for seeing orangutans are:
•    Borneo (Malaysia) Sabah – Sepilok, Kinabatangan river and Danum valley
•    Borneo (Malaysia) Sarawak – Batang Ai
•    Sumatra (Indonesia) -Gunung Leuseur  National Park
•    Kalimantan (Indonesia)  -Tanjung Puting National Park in Kalimantan,
Indigenous orangutans are found on only two islands, Borneo and Sumatra. Below we discuss the best places if you are looking for a wildlife holiday, adventure holiday or multi-activity holiday specifically to see orangutans. Of course, choosing the “best” destination is complicated by the fact the Borneo is politically and territorially divided between Malaysia and Indonesia, with the northern part of Sarawak and Sabah belonging to Malaysia and the southern part, know as Kalimantan, belonging to Indonesia. Effectively you have to make a decision as to whether you go to the Malaysian side of Borneo or the Indonesian side or alternatively you can take a trip to see orangutans in Sumatra which also happens to be part of Indonesia. There is no right or wrong answer as to where to go, just different experiences depending on the choice you make as to where to see orangutans, which in Indo/Malay means “person of the forest”.

There are many advantages of a tour to Malaysian Borneo to see orangutans and other wildlife. A key advantage is that the communications and accessibility are arguably easier than on the Indonesia side, with international links  from Kuala Lumpur, Singapore and Hong Kong 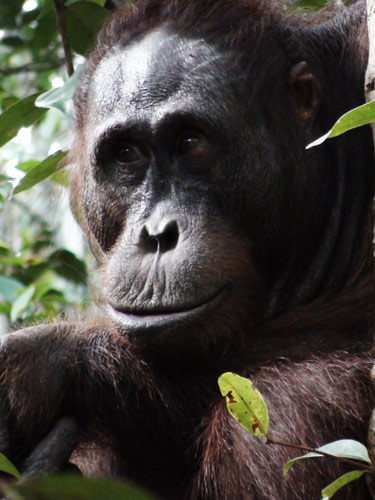 connecting direct to Kota Kinabalu (provincial capital of Sabah) or Kuching (provincial capital and gateway to Sarawak). Also the internal infrastructure and resources are more developed than on the Indonesian side, which you might therefore  argue that the latter  is less spoilt than its northern neighbour. Bornean orangutans (pongo pygmaeus ) are slightly darker in colour and the males have wider cheek pads. The height of the males range from 1,2 – 1,4 m, and weigh  50-110 kg. Female heights range from 1-1.2m and weight 50 -100 kg.

However the Sepilok Orangutan Rehabilitation Centre has a number of things going for it and that is first and foremost that it is the largest and most renowned in the world and Sandakan’s biggest tourist attraction. There is an educational centre to learn about the work to rehabilitate orangutans into the wild and you can walk into the rainforest to see orangutans being fed in their natural habitat, as they are prepared in a semi-wiild environment for rehabilitation.

One of the other advantages of a trip to Sepilok is that it can be combined with tours to the Kinabatangan Wildlife Reserve, situated on the Kinabatangan river, the second longest river in Malaysia, with a length of 560 kilometres. This valley is known for its remarkable wildlife and fascinating habitats and is a great destination for seeing wild orangutans and to spot proboscis monkeys and Bornean pygmy elephants and reptiles. The Kinabatangan river offers the opportunity to go trekking in Borneo in the surrounding jungle in search of wildlife, birds, reptiles and insects  and to learn more about Borneo’s fragile eco system and how it is threatened by commercial interests such as the power of the palm oil industry.

The Danum Valley is another place to visit and can be combined with a trip to Sepilok. It has one of the  richest concentrations of wildlife anywhere on Borneo.  The Danum valleys virgin tropical forest is teeming with wildlife which includes orangutans, proboscis monkeys and pygmy elephants. However you are not guaranteed to see wild orangutans as their population is this area is still relatively sparse, although still arguably the best place to see wild orangutans in Malaysian Borneo.  You will definitely see plenty of wildlife, its just difficult to know exactly what, as luck does play its part on all such trips. But with luck you will see wild orangutans, red leaf monkeys and Bornean gibbons.  Nevertheless the birdwatching in the Danum valley is second to none and walking night safaris provide an opportunity to experience the Borneo rainforest’s  nocturnal wildlife.

The other option for seeing Orangutans in Malaysian Borneo is at Batang Ai, (a remote spot on the Indonesian border) in Sarawak, which is a wonderful example of community-led conservation and is really the only place to see wild orangutans in Sarawak.

The protected area of almost 10,000 square kms forms a sanctuary for the Bornean Orangutan (pongo pygmaeus) as well as many other endangered species. The advantage of a tour to Batang Ai is the opportunity to see traditional communities and in particular the Iban tribes who are the custodians of this lush national park and its rare wildlife. Wildlife and cultural tours to Batang Ai in Sarawak are accessed by their formidable river system enabling you to experience their longhouses and learn about traditional life and dance as well of course as seeing wild orangutans. 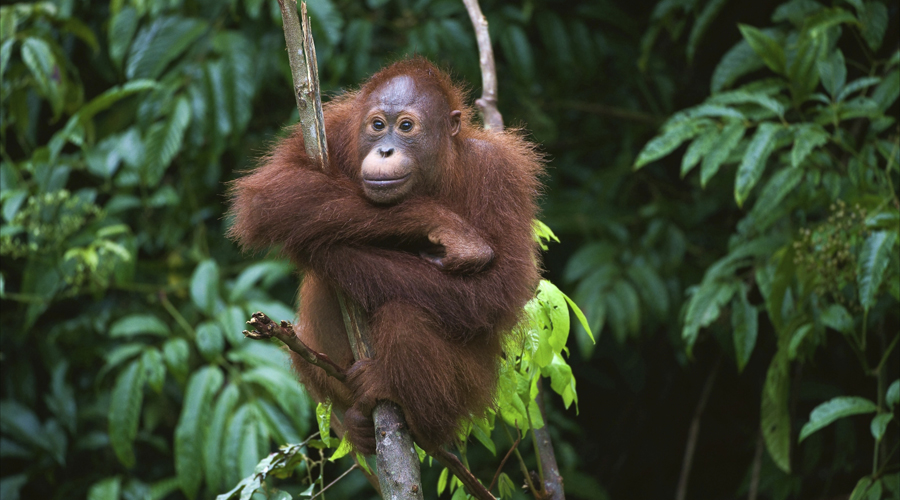 Batang Ai National Park is part of the region’s largest trans-national tropical rainforest conservation area and massive man-made lake that produces hydro electric power. The park of Lanjak-Entimau Wildlife Sanctuary in Malaysia and the Bentuang-Karimun National Park in Indonesia forms a sanctuary for one of the few viable orangutan populations in central Borneo (estimated at over 1,000 animals) as well as many other endangered species. For conservation reasons, Batang Ai National Park is only partially open to the public but has the highest orangutan population density in central Borneo (around 1.7 animals per sq km). Whilst there is a good possibility of seeing wild orangutans this is not guaranteed and should be regarded as something of a bonus.

An alternative to Malaysian Borneo, are trips to Sumatra or a tour to Tanjung Puting in Kalimantan, Indonesia. These areas are a little more off the beaten track and some would argue all the better for that but with that comes slightly more complex travel arrangements.

A trip to Sumatra will involve viewing Sumatran orangutans (pongo abelii) confirmed as a separate species, which have lighter hair with paler red colouring  and longer hair. The male orangutans grow to about 1.4 meters tall and 90kg and the female orangutans are smaller than the males, averaging 90 cm and 45 kg. They are rarer and thinner than Borneo orangutans. The best place to see orangutans in Sumatra is in Gunung Leuseur. Gunung Leuseur is a national park in Northern Sumatra, Indonesia and provides the habitat for Sumatran orangutans, elephants, tigers, and rhinoceros.

It is one of Indonesia’s oldest national parks and was established in 1980 and boasts one of the richest tropical rainforest in Southeast Asia and has been a UNESCO World Heritage Site since 2004. It has a well known as an orangutans station or orangutan care center. And Bukit Lawang is one of the main access points to the formidable rainforest of Gunung Leuseur. There are good opportunities for jungle trekking in Bukit Lawang/Bohorok to view the feeding stations for the orangutans and for viewing other wildlife. A tour of the adjacent area of Berastagi offers magnificent views.

Last but not least is a visit to Tanjung Puting National Park, – Kalimantan, Borneo. 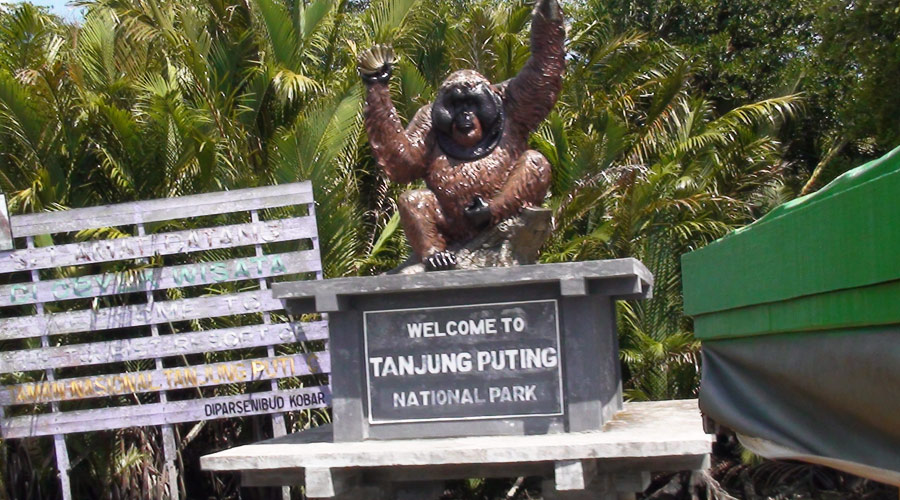 If you want to see large numbers of orangutans then this is the place to go as it is estimated that the population of the national park stands at some 4,000 orangutans and is one of the largest and most diverse protected areas. To get to Tanjung Puting National Park, you need to fly via Jakarta or Semarang in Java as there are no direct flights from Singapore, Kuala Lumpur or Hong Kong.

Travel here is quite different and typically by Indonesian house boats known as “Klotoks.” These are used for navigating the rivers such as the Sekonyer river to reach the national park and are also used as a bases 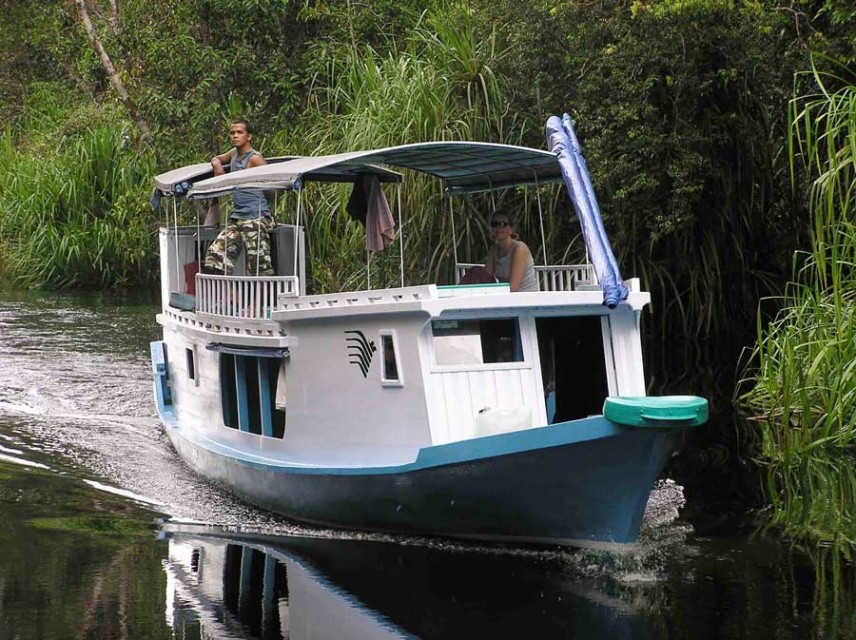 for living on. Thus you can relax on board your boat and observe the myriad of wildlife including proboscis monkey, gibbons, semi-wild and normally wild orangutans and birdlife. And at the historic Camp Leakey research station you can trek through the jungle to see orangutans being fed. You can also visit another orangutan feeding station, Pondok Tangguy and learn about the important work of the Friends of the National Parks Foundation (FNPF) of Indonesia, see their plant nursery and reforestation programme in action to mitigate the devastation brought on by the oil palm industry that destroys hundreds of acres of prime rainforest on a daily basis.

Whether you choose to holiday in Borneo (Sarawak – Batang Ai)  or Sabah (Sepilok, Kinabatangan river and Danum valley )  or Sumatra (Gunung Leuseur)  or Tanjung Puting in Kalimantan,  seeing orangutans in the wild will be an experience of a lifetime. There are a number of other less well known places to see orangutans for the arch enthusiast but here we have covered the main options, on and off the beaten track.

See all our Orangutan crazy trips below: