Getting to know your lemurs!

Madagascar is home to many amazing animals, but no more so than the lemur. This animals are endemic to the island and display a range of interesting behaviours, such as singing like a whale (the Indri) to dancing across the sand like a ballet dancer (the Sifaka).

Lemurs are prosimians, which is a type of primate, and have diversified without competition from other primates in Africa, similar to how Darwin’s finches evolved into many forms on the isolated Galapagos Islands. The Lemur superfamily is called Lemuroidea and lemurs are classified into five distinct families:

The grey mouse lemurs are nocturnal, solitary foragers who congregate at daytime sleeping sites. Females and their dependent offspring will sleep in groups. Females are considered to be dominant over males, giving them preferential access to food and the choice of with whom to mate.

Despite their name some grey mouse lemurs have coats that are a reddish colour. They will scent-mark their ranges by rubbing their faces on twigs and by urinating on their hands and feet. Generally grey mouse lemurs will live between 10-15 years. Until recently they were thought to be the smallest living primate. This was disproven when the pygmy mouse lemur (Microcebus myoxinus), thought to be extinct, was re-discovered. 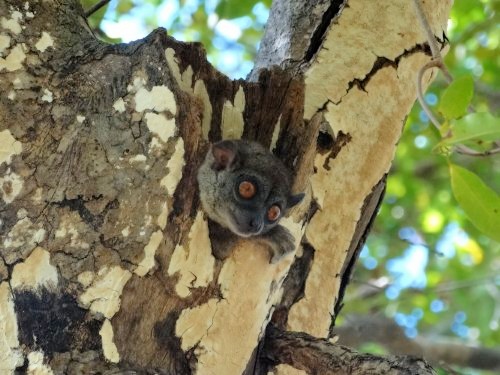 The common name “sportive” is because all these lemurs are highly active. The small-toothed sportive lemur has a long neck and short dense fur with a dark stripe in the center of its forehead that lightens as it runs down the back.  Its fur is thick and chestnut clour. Their hands are black, with five long mobile fingers, excellent for grabbing branches and grasping food such as leaves, flowers and fruit.

The small-toothed sportive lemur is nocturnal and lives in the treetops. They have been observed resting in the sun during the day next to their tree cavities. Males use loud crow-like calls to mark the borders of their territories.

These can be found in Ranomafana National Park 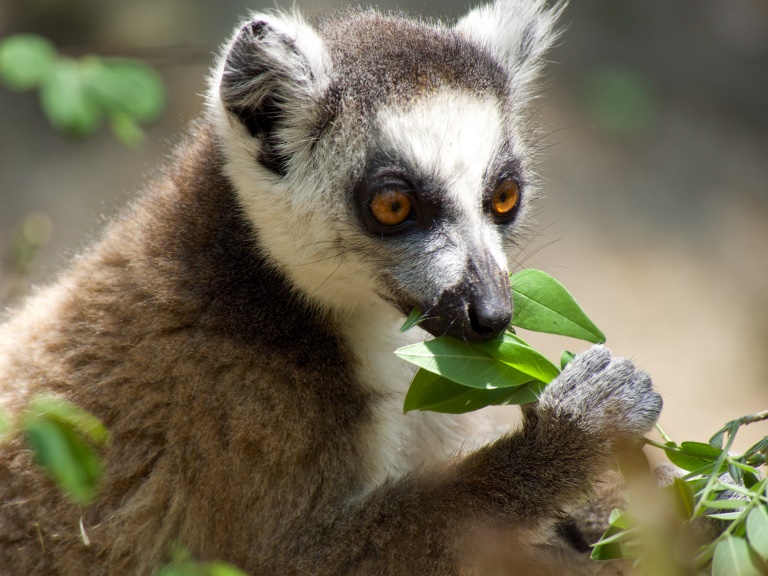 Ring-tailed lemurs are the most intensely studied of all the lemurs and the most easily recognizable species of lemur because of their tail markings.

They move quadrupedally, holding their tails almost completely vertically as they move, with the tip of the long tail forming the shape of a question mark. They are the most terrestrial of all the lemurs, spending over a third of their time on the ground.

Groups are large, from 12 up to 30 individuals. Females are dominant over all males in the groups, but they do not have a stable hierachy. Females live in one group their entire lives, while males migrate from group to group. Constant vocalizations among members keep the group together. Ring-tails have a large vocabulary, including several different types of alarm calls which alert group members to potential danger.

They are known for basking in the sun in groups, absorbing the warmth of the sun through their less dense belly fur. 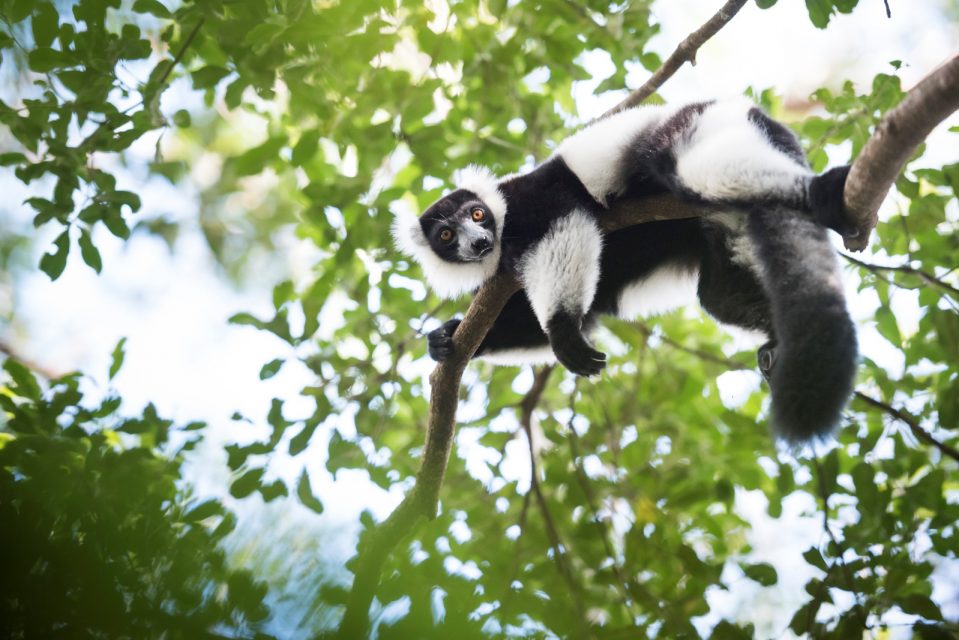 Ruffed lemurs get their name from the long, thick hair which appears as furry “ruffs” running from the ears to the neck. There are color variations with populations in the north tending to be predominantly darker than those in the south who are whiter. They can be observed hanging upside down, clinging to branches by their feet to feed. Peak activity occurs during the early morning and late afternoon/early evening, resting usually occurs around midday.

Ruffed lemur reproduction is highly seasonal. They breed between May and July and most infants are born in September and October. Females can nurse up to six infants simultaneously. Most primates carry their babies around with them but ruffed lemurs build nests in trees and leave infants in the nest whilst they look for food. Females form the core of the group and will defend their territory. 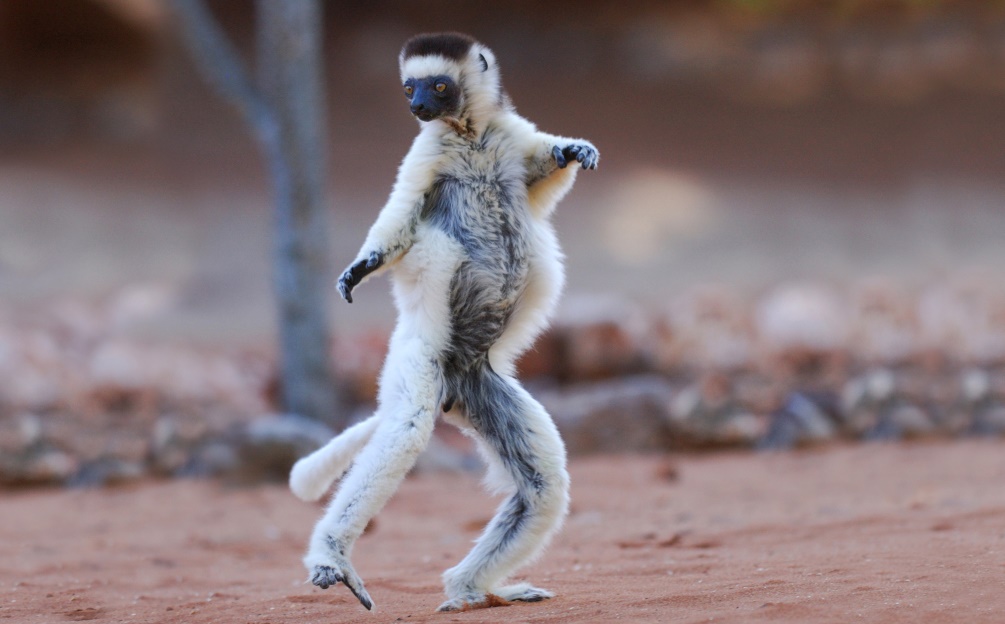 The name “sifaka” comes from very noisy guttural barking call that the troop make all at once during territorial confrontations.

Verreaux’s sifakas have distinct coloration with white fur and a hint of yellow contrasting their hairless, black face. Their hands and feet are also black. They have a long tails (from 43 to 56 cm in length) which are roughly the same length as their body (45 to 55 cm). They live and forage for food in small troops, eating almost any plant parts that are above ground. They are territorial but will often defend food sources rather than strict boundaries.

Verreaux’s sifakas are often described as a vertical clingers and leapers as they use their hind legs to leap up to 10 m from one tree to the next. Unlike many other primates, they also makes use of a highly specialized form of bipedal movement while on the ground, using their hind legs with their forearms held up high for balance. This has lead to them being referred to as “dancing lemurs”. 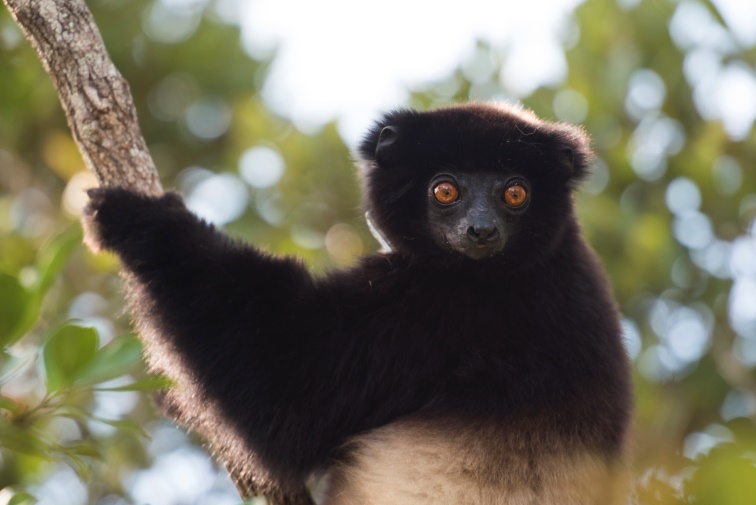 Called Babakoto in Malagasy, meaning “little father” or “man of the forest”, they are the largest living lemurs at all reaching up to 1 meter. They have varying amounts of black and white and a short tail. They have monogamous family groups of one female and one male. The males will defend their territories.

The have a loud call which lasts several minutes and is usually heard between 8am to midday. This call is probably best described as a howl performed by the whole group. They also have a honk as a contact call they use when one indri is separated from the group. 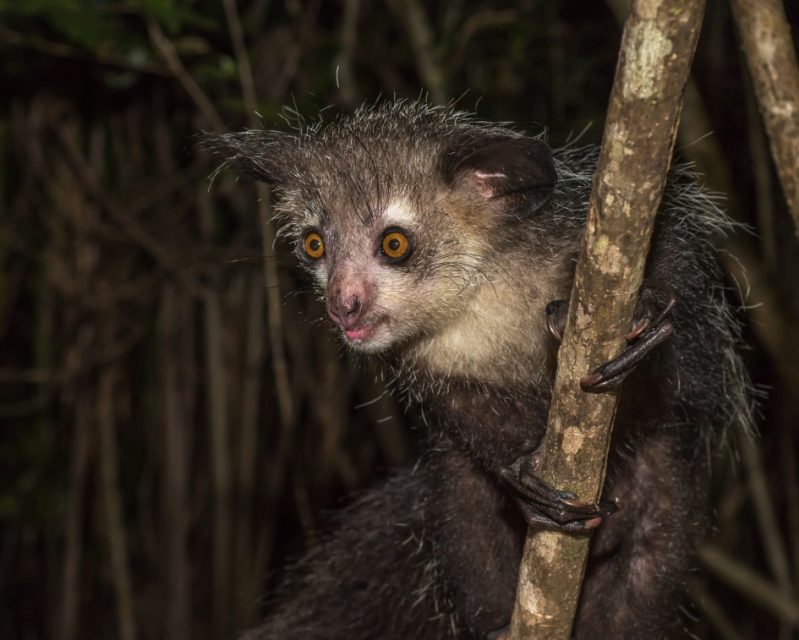 There is only one species in this family, the nocturnal aye-aye. It is the world’s largest nocturnal primate and has an unusual elongated finger, which looks almost skeletal. With its huge eyes and ears this slightly weird looking lemur is often considered the most unusual primate. They are mostly solitary creatures who can keep very large territories to themselves. The aye-aye has a history of persecution in Madagascar as they were once considered an omen of death and evil.

A full-grown aye-aye is usually about three feet long, with a tail as long as its body. Aye-ayes can live over 20 years in captivity. They eat fruit, nuts, seeds and fungi. Their specially adapted elongated third finger is used to find nutritious grubs and larvae within cavities in wood by rapidly tapping on trees and listening for the sounds of prey beneath. They can tap at a rate of up to eight times per second and their big ears pick up the sounds of the insects. They then gnaw a hole in the wood and use those same middle fingers to probe and hook out the grubs. 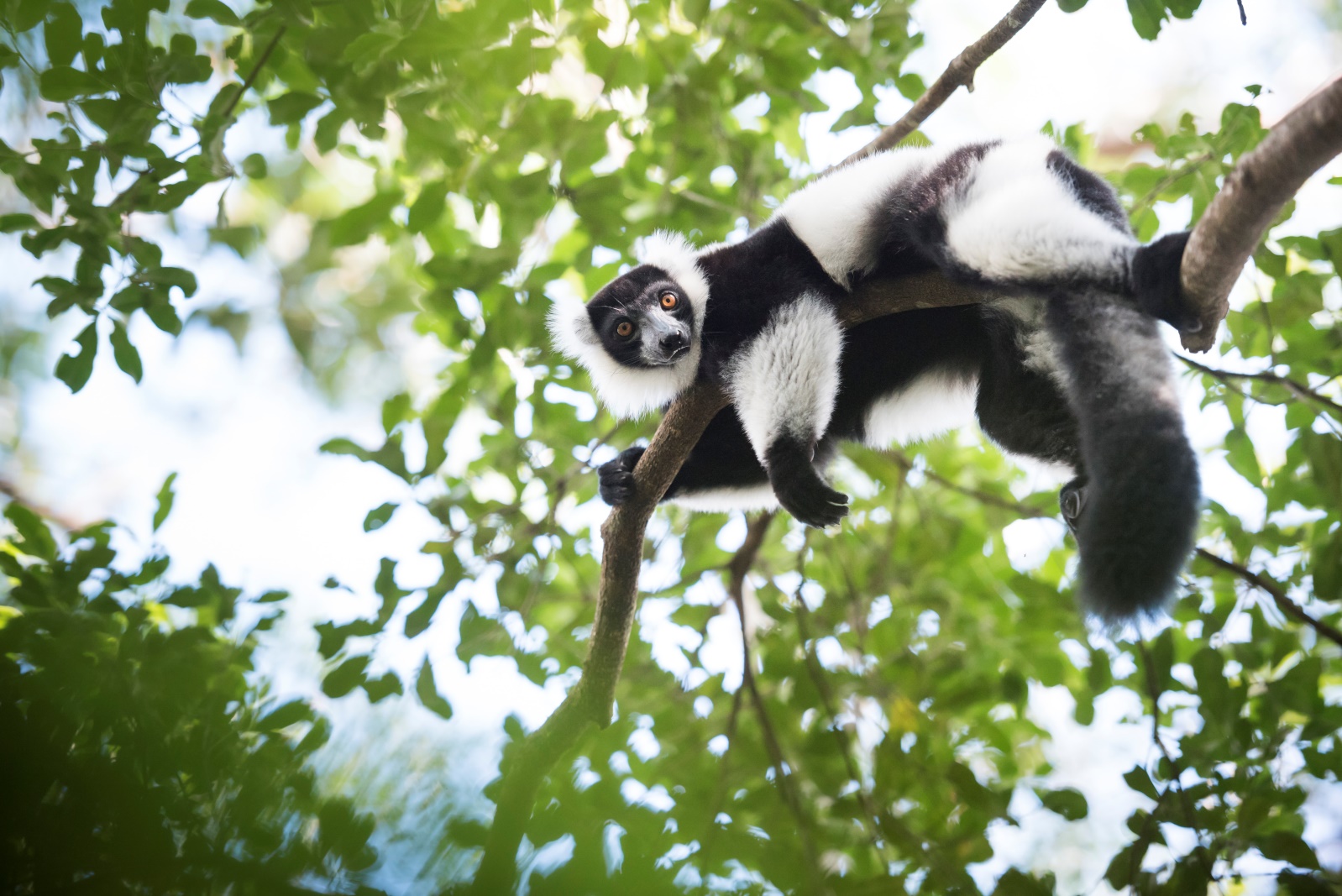 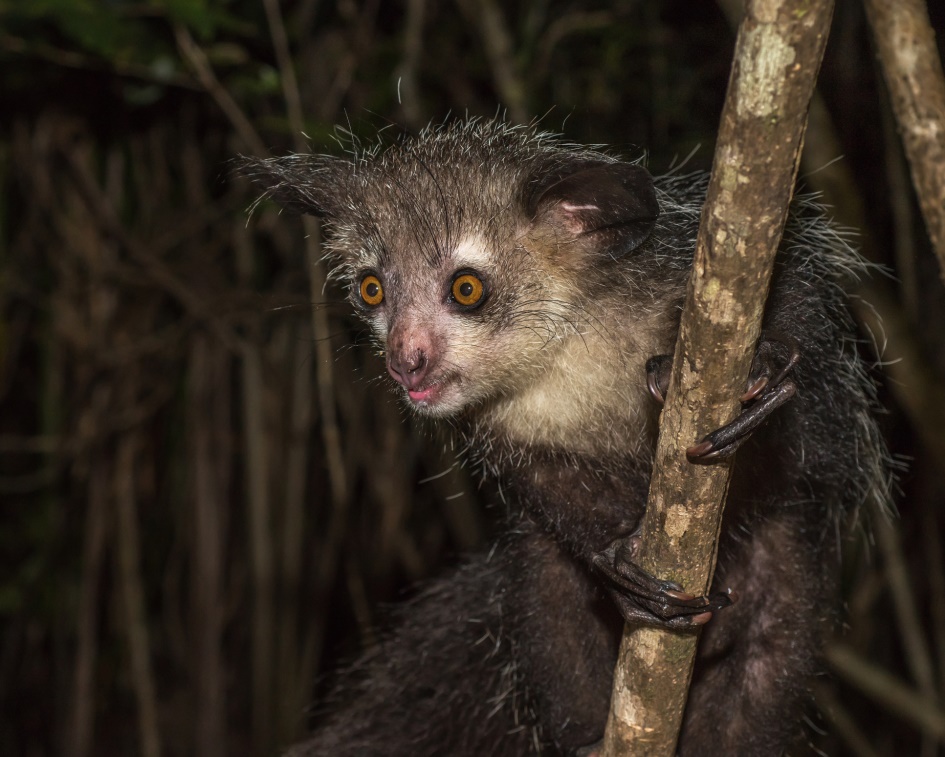 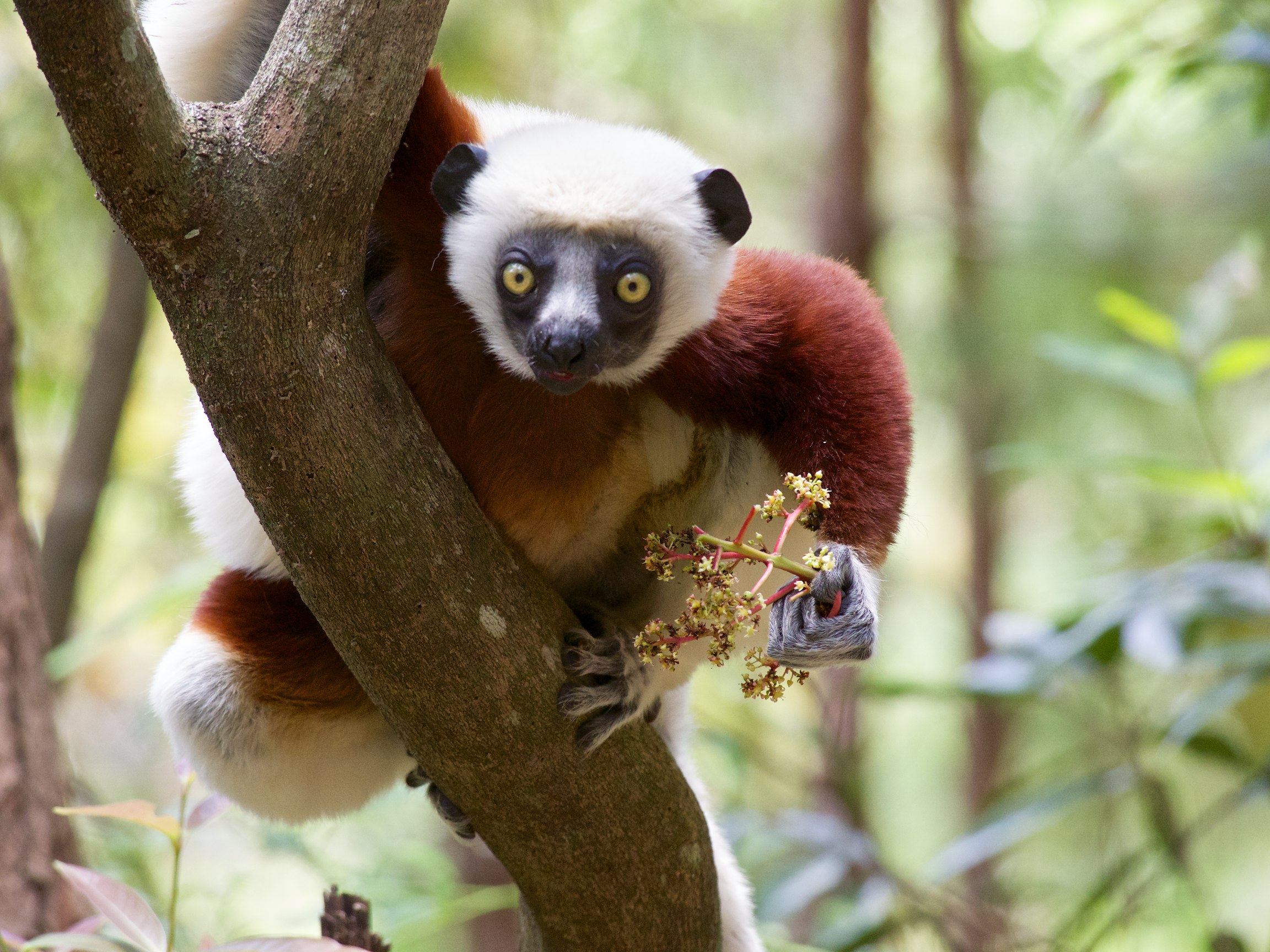